Monthly cable subscriptions can definitely add to your stack of monthly bills! That being said, it is one of our most convenient, as well as easy, methods of relaxation. Why deprive yourself of a movie marathon during the weekends? After all, you’ve worked hard for it.

But what if you can still watch your favorite shows without an expensive monthly subscription. Cutting the cord is possible if you have the right antenna. But what is the difference between a UHF and VHF antenna?

Lets find out the difference between a uhf and vhf antenna

What’s the difference between these two bandwidths?

How Can You Differentiate a UHF from a VHF Antenna?

It’s quite easy and simple to know whether an antenna has UHF or VHF signal capacity.

Since UHF signals have shorter bandwidth, it will appear as shorter elements on the antenna. The element is just a few inches wider. And they usually appear like straight prongs or arranged in parallel rows.

VHF, only, on the other hand, appears longer since it has a longer bandwidth. You can readily tell that an antenna has VHF capacities with the V-shaped element.

Additionally, there are a lot of antennas that have both UHF and VHF capability. So you would see the elements combined in the antenna.

UHF vs VHF, Which Antenna to Get?

Deciding which antenna to buy is easier than you think. Here are several factors that you can consider.

How to Choose the Best VHF Antenna?

VHF channels may not be your cup of tea when it comes to watching crisp images. But it’s one of the most indispensable marine electronics. It can save your life from a sea emergency.

So how to spot the right VHF antenna?

You may also like: Best Omnidirectional Outdoor TV Antenna

Which is Better to Get, UHF or VHF Antenna?

That depends on where you’re going to use it.

VHF antennas are ideal for outdoor use and long-distance. Thus, signals are used in boats and sea vessels. It’s also suited when you’re camping or staying in an RV.

UHF antennas, on the other hand, are suitable for indoor use. It’s ideal for wireless connections. And these signals can overcome obstructions such as roofing materials better than VHF antennas.

Alternately, to get the best of both worlds, you can choose an antenna that has both capacities. And if you want your antenna to receive digital channels, it has to be equipped with both VHF and VHF bandwidths.

What about for antennas that do not have visible elements, how will I know if it has VHF or UHF capabilities?

Some irregular antennas may not readily show the elements because it’s concealed. One way to know if it has UHF or VHF bandwidth is to check what channels your antenna can pull in.

What’s the difference between a low VHF and a high VHF antenna?

Will a UHF antenna pick up VHF channels?

No. UHF signals are not capable of pulling in VHF channels.

How can  I get most local channels in my area?

Combining both HF and VHF signals will help you gain more access to local stations in your area.

It’s fairly easy to spot the difference between a UHF and VHF antenna. And consequently, the question as to which bandwidth is better follows. Remember, VHF antennas are better suited where open terrain is involved. Thus, we are looking at outdoor applications.

UHF signals, on the other hand, are of indoor use since they can penetrate through bricks and walls better. You can get the most bang for your buck if you’ll buy an antenna with both UHF and VHF signals. 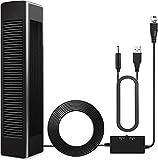 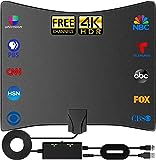 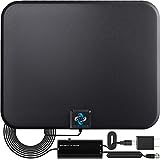 Antennatips.com is a participant in the Amazon Services LLC Associates Program, an affiliate advertising program designed to provide a means for sites to earn advertising fees by advertising and linking to Amazon.com.